The biological decoding of diseases (biodecoding or psychosomatic approach) proposes approaching conditions from an emotional point of view.

If dermatologists, allergists, and all health professionals agree that eczema has a significant emotional component, biodecoding goes further.

Every disease expresses an unmanaged (or mismanaged) emotional conflict that the body seeks to resolve.

Each system, each organ, and each body area may react according to an emotional shock that is difficult to live with. The body and the brain will try to “resolve” the conflict by implementing a biological solution.

Eczema and biological decoding of diseases

In the case of eczema, it is a separation conflict at the origin of the pathology. Thus, following a shock where separation occurs, the body will ulcerate the skin cells to “facilitate” the contact.

This is the primary function of the skin: to allow contact.

The body will reduce (virtually) the distance between the thing (object or feeling) or the person from which it is separated by removing the skin.

It reduces the distance, but it also facilitates contact by making the skin more sensitive and receptive to the sought touch.

For example, death, divorce, rupture, severance of the link. 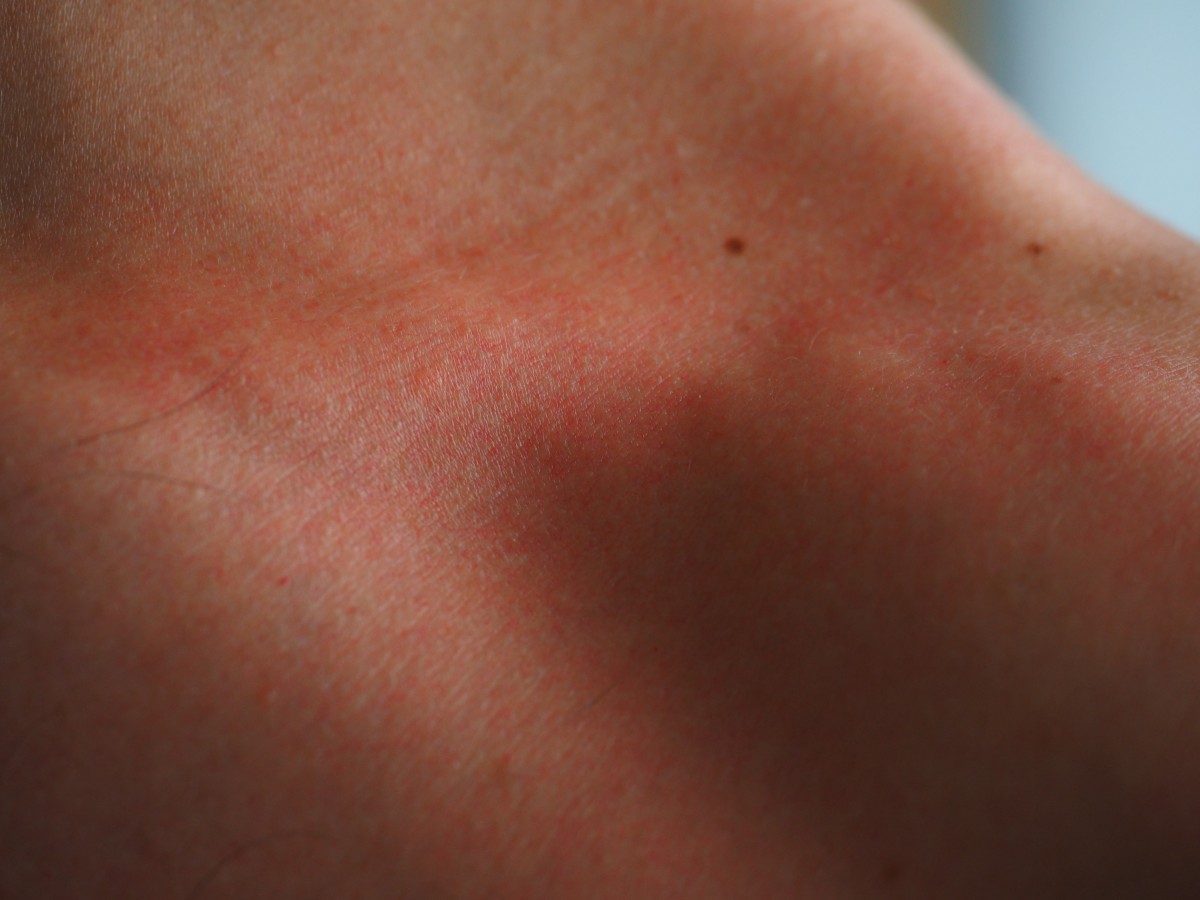 The location of eczema is far from trivial, and the brain does not “play” with triggering eczema in a particular place for no reason or at random.

Moreover, each location remains (bio)logical, even noticeable, always with a notion of separation:

It may be something that mentally preoccupies us for the scalp but from which we seek to separate (“it’s taking over my head”). For a newborn with scalp eczema, it may be separated from the contact he had in utero (head pressed against this or that organ).

Ear eczema reveals an auditory separation. “The voice is no longer heard.

For the eyelids, it will be a notion of separation of the gaze, someone that one has “lost sight of”.

For the wings of the nose, one will think more of a separation in a somewhat suspicious or unhealthy situation (“it smells bad”).

For the edge of the mouth, one will evoke the separation of a kiss.

The elbow is generally touched on the:

The hand instead evokes a separation from the father or the paternal function.

The knee is a little more subtle since it generally indicates a separation from a symbolic point of view, in a context of submission (putting a knee to the ground), that is to say, with a notion of authority (parental, hierarchical).

The foot is concerned, again symbolically, by what evokes the mother. It can be the person who plays the role of mother and the company which is “nourishing”, for example.

Generalized eczema suggests that the whole being is affected brutally.

Children will more quickly develop generalized eczema following a separation conflict insofar as, unlike adults, they function more as a whole (not as separate parts of a whole).

In addition, besides these various tracks, each zone can evoke something particular in the history of each one.

For example, a child may develop eczema on his or her belly if his or her parents gently massage the abdomen to sleep and then suddenly stop doing so.

Suppose it is the separation that is the principal conflictual coloring. In that case, one finds, however, some other possibilities. They are also related to the symbolic or the additional functions the skin occupies.

From a symbolic point of view

In the symbolic aspect of conflicts, one must always be extremely careful as they only speak to a certain number of people (and generally not the majority). They are primary avenues to explore.

It can be a form of wordplay in which eczema becomes ex-aima or exhuma.

In the first version, we find the notion of separation from an “ex”.

In the second proposal, we can consider the loss, the separation from a contact that we would have liked to be reassuring or from a deceased person.

It is also possible that nummular eczema (from the Latin “nummus”: coin) results from separation from a sum of money.

Taking into account the other functions of the skin: sensation (and thus, by extension, the feeling of existence) and protection (against external agents: sun, microbes, pollution), we find the separation of the:

In practice, we look for a conflictual shock that evokes a separation that preceded the appearance of eczema by a few hours or a few days.

Based on this information, we can:

For the youngest children, the simple fact of finding the triggering element and expressing it (telling the story to the child by putting all the emotion felt) is often enough to solve the problem. Even if the child doesn’t seem to be listening, the unconscious does.

For atopic dermatitis and eczema of the infant, it will be necessary to be interested in the conflicts of separation experienced by the parents (in the broad sense, i.e., the family) and especially during the pregnancy. The separation can be:

Again, telling the event may be enough.

Of course, these are only the basic facts, and some cases will be much more complex. In this case, it will be necessary to consult a specialized therapist.